Oxford People in the American Revolution
by Dorothy A, DeBisschop
PRESENTED TO THE SCHOOL CHILDREN OF OXFORD
by the Oxford Bicentennial Commission 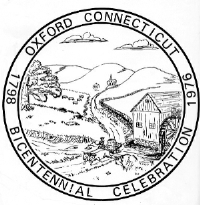 Oxfords Bicentennial Emblem is on the front of this booklet, It is a trade-marked design created Oxford artist Foster Sperry, for the Oxford Bicentennial Comm ission.
The water-powered mill in the foreground shows early Oxford industry, which was common along the streams and waterfalls of the town.  On the ox-drawn cart is a hogshead of molasses, which was moved from New Haven to Oxford for use in area stills.  The ox cart is crossing the Little River at an ox ford.
The treaty oak is at left. This was the boundary between the Indians of Chusetown (now called Seymour) and the Indians of Woodbury. Under this tree an early land purchase was made by the white men from the Indians,
The three hills in the background represent the three general hills of Oxford -- Chestnut Tree Hill, Governors Hill, and Good Hill or Pisgah Mountain.
The church between the hills was included as a symbol to show that the first efforts at town government were the establishment of a local parish of Oxford.
Other parts of the picture include the stone wall to show the rocky nature of the land, and a herd of sheep. They are grazing in a field fenced by a split rail aig-zag fence. The sheep and other livestock were driven through Oxford on their way from Litchfield County to New Haven.

The People of Oxford in the American Revolution
The citizens of the area now known as Oxford played an active part in the American Revolution. At that time Oxford was part of Derby. Because Oxford had its own church, it was called Oxford Parish. This first church is now known as the Congregational Church.
The people of Connecticut took part in the Lexington Alarm, which was a request from the people of Boston for help.  On April 18, 1775, the Lexngton and Concord battles were fought near Boston. when the American lost those battles, they asked the people of Connecticut and other nearby states to help.
In Derby, 44 men marched to aid the Boston area. These men were not a regular army. They were a group of voluntyeers, who held drills to practice being soldiers. They were farmers, businessmen, techers, and young men.  Of the men who marched from Derby, many were from Oxford.

Patriots and tories disagree in Oxford.
While the patriots were willing to fight for their independence, the tories wanted to stay loyal to the King of England. Both groups believed that what they were doing was right.  This led to many disagreements and exciting events in Oxford.
One of the groups in Oxford which had many Tories in it was the early Episcopal Church. St. Peter's Episcopal Church in Oxford was forced to close down during the American Revolution. The Episcopal Church was sponsored in America by an English group called the "Society for the Propagation of the Gospel in Foreign Parts."  The church was called the Church of England. Because of the ties with thE English government and religion, many local patriots said it was wrong to go to the Episcopal Church.  So much trouble was raised over this question that the local church was shut down in Oxford for the period of the American Revolution. Whether the people of that church were tories or patriots, they had no place to go to church during the war.

Committee of Inspection checks on Tories
The English were camped near Connecticut at Long Island and Boston. Area patriots were afraid that local tories would give the English army supplies, ammunition or information. Because of this, the patriots set up a Committee of Inspection. The Committee of Inspection was appointed by a Town Meeting. Some Oxford men were on that committee, including Col. Jabez Thompson, Captain Thomas Clark, Leiutenant John Bassett, John Davis, Captain Zachariah Hawkins, and Samuel Wheeler. This group of men arranged for guards to be placed along the Housatonic River to guard against a surprise attack by the English army. It also kept track of known tories, and controlled travel in and out of town. The people were suspicious of nearly everyone and persons needed a pass in order to visit nearby towns.
Even Captain Hawkins, who was a member of the Committee of Inspection, was accused of being a tory by some people. Captain Hawkins was afraid to travel and got a special pass from the selectmen. The pass said, "Captain Zechariah Hawkins is come to this town to take care of a farm he has has here and some epople say he is toryfied which makes him afraid to execute his business, but we have no suspicion of his being upon any evil design towards the United State." It was signed by thew town selectmen of the town he wanted to visit.

Kidnappings in Oxford
The suspicious nature of the patriots should not be laughted at, because there were several kidnappings in Oxford. They were committed by British soldiers or Tory raiders.  Several young men were kidnapped. On eof the most famous kidnapping stories which took place in Oxford was the kidnapping of Chauncey Judd. Chauncey was a member of the Oxford volunteer militia, although he was only 16 years old. He was captured by some tories and an American traitor, Graham. Chauncey was walking home and saw the torie and the traoitor, who were fleeing from the area. They had just robbed the Bethany home of patriot Captain Ebeneezer Dayton.
Part of the kidnapping story occurred in the part of Oxford that is now Naugatuck, but some happned in areas which are still in Oxford. The Tories and their prisoner hid from the patriots in the old Wooster Tavern. This tavern was at the corner of Park Road and the Oxford Turnpike (now called Oxford Road or Route 67).  From this place, the tories went to a barn to hide during a snowstorm. Later they fled to the Housatonic Rier. They were captured by patriots at an island on the River.  The tories were put in prison. The patriot boy, Chauncey Judd, survived and lived to a ripe old age in the Oxford-Naugatuck area of Gunntown Road.

John Davis also kidnapped in Oxford
During the war, the British forces occupied New York. They send a group of troops all through the southwestern part of Connecticut and forcibly carried off all the young men they caould capture. They thought some of the captives would be persuaded to join in the fight against the patriots.  Those who would not join them would at leat not hav ea chance to join with the patriots against the English forces.
One such kidnapping took place in Oxford on Chestnut Tree HIll Road, John Davis, who later became known as Colonel John Davis, was a young man when he was captured. He was held prisoner in New York for some time. However he would not take up arms for the English. He eventually escaped and returned to Oxford. Dispite this experience, John Davis did not join the patriot army either.
In later years, John Davis became active in the local militia. He was a prominent citizen and a member of St. Peter's Episcopal Church. Among his family were selectmen of Oxford and members of the state legislature.

Some Oxford men did not want to serve in the army.
Not all Oxford men wanted to serve in the army, Just as John Davis refused to serve in the English army, one Oxford man refused to serve in the patriot Army. His name was John Salem Hyde, Towards the end of the American Revolution, a draft system was established by the patriots. This was to get more men to serve in the American army. John Salem Hyde lived on Bowers Hill Road with his parents. When American army officers came to his house to draft Hyde into the army, he saw them coming. He climbed into the huge chimney of his father's house and hid. None of John's family saw him go into the hiding place, When the officers could not find John in the house, they went to the barn, where there were piles of hay stored for the winter. The officers assumed that young Hyde was in one of these stacks. They called for him to come out. There was no response, The officers decided to at least get his body, and they began running long bayonets through the hay mounds. All this time John's mother watched the officers, thinking John was in one of the hay mounds.  The officers finally gave up and rode away. John came out of hiding in the fire place chimney.. His hiding saved him from the unwanted service in the patriot army.  But it caused his mother's mind permanent injury, She never recovered her reason.  From that day on, she would only say, "Have you seen anything of John Salem Hyde today?".

Patriot and tory beliefs divide area families
The division between tory and patriot was great, and it even drew apart families.  Often members of the same family held differing opinions, One famous family with patriots and tories from Oxford was the Woosters. One of the Woosters was the famous patriot General David Wooster. Wooster was born in Stratford, but lived in Oxford during his boyhood.  He later moved to New Haven. Several of his relatives remained in Oxford during and after the American Revolution.
General David Wooster died in Danbury, while he was leading a raid on the British who had just burned that city.  He served in that battle with another famous American, who later became a traitor - General Benedict Arnold.
Wooster's memory is preserved in both New Haven and Danbury. A monument was erected to his honor   in Danbury, and Wooster Square in New Haven was named after the Oxford boy.

Tories in the Wooster Family
There were tories in that family as well. His counsin's nephew was one of those who took part in the kidnapping of Chauncey Judd. This wooster, Henry Wooster, had an exciting adventure after his capture for kidnapping. He was sentenced to Newgate Prison in Granby, Connecticut.   Newgate prison was feared by state residents because of its harsh conditions. The prison was an old mine. Prisoners were kept in the old tunnels.
Wooster escaped by digging out a drainage tunnel with his hands.  He was nearly detected several times, but finally escaped. Many of the prisoners who escaped with him were recaptured. Henry fled to the coast ofNew London, Connecticut. He got on an English ship and enlisted in the English service.

One Wooster Tory returned to family.
Davis Wooster was also sentenced to Newgate for his part in the Dayton robbery and Judd kidnapping. He was later freed and permitted to join the patriot army. His family did not know of his fate after he was sent to Newgate Prison. Many years later, David Wooster returned to see his parents. His family was happy to see him and forgave him for his tory actions.

Reconciliation after the war.
After the war was over, Oxford people who were tories and patriots gave up their old quarrels and began to work together for the town of Oxford. Just ad the Wooster family re-united after ther war, the people of Oxford began to cooperate with each other once again.

OXFORD MEN WHO SERVED IN THE CAUSE OF FREEDOM

(Note: above list is a revision of the list which appeared in the 1976 booklet.  The names have been alphabetized, one spelling correction [Amas Fot should have been Amos Foote] and ? soldiers have been added to the original document.)